A few months ago, some (awesome) Foo Fighters fans in Richmond, Virginia organized a crowd funded effort aimed at bringing the Foo back to RVA – a city they haven’t played since 1998. Foo Fighters RVA Fans bought $50 tickets for a show that didn’t yet exist. But oh, did we hope… A day or so before the deadline, local businesses Sugar Shack Donuts and Brown’s Volkswagen donated the amounts required to meet the fundraising goal, and then, we all waited…

And soon enough, those that bought into the scheme lost their collective shizz when this appeared in our Twitter feeds:

It worked! Four dudes with a plan, 1,000+ fans, and some local businesses did it! If you pay for it, they will come!

And now, for a blog post that is not like my usual. But I’ve been sitting on this for a week and am about to head out on another adventure. So, please enjoy this bullet list style recap that I jotted on my iPad a day or two after one of the most fantastic concerts I’ve attended (and that’s really saying something.) My BFF Carey joined me (via train from Raleigh, NC!) for a whirlwind, and man. It rocked.

– We paid at box office, my name was highlighted on the donor list, we were shuffled inside the theater lobby to get wristbands (adorned with Pearl Jam looking space creatures) and we were off to lunch at an adorable place called Pasture followed by a tour of the Jefferson Hotel. 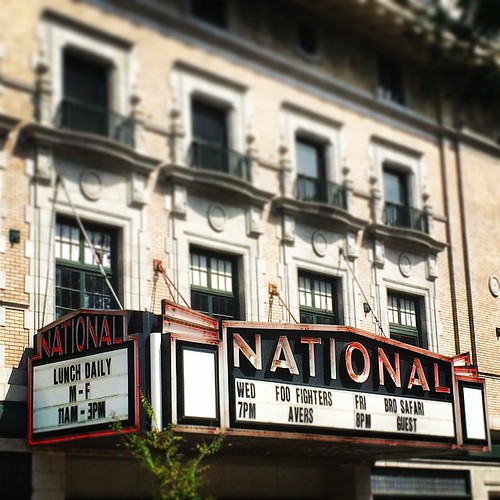 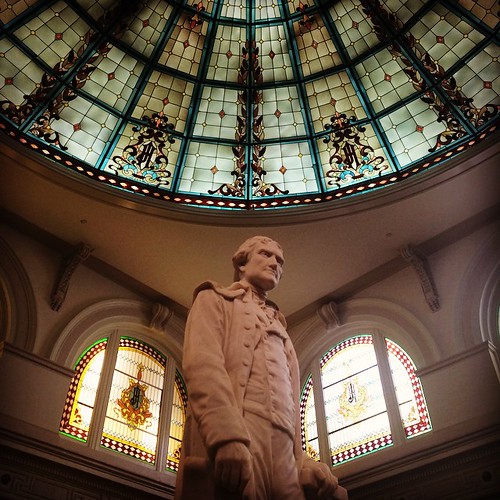 – Chillaxed and had a tiny bday celebration w/ Bellini’s and 9:30 Club cupcakes back at the hotel. In a reverse birthday move: Carey gave me a gift! And I love my new bracelet. 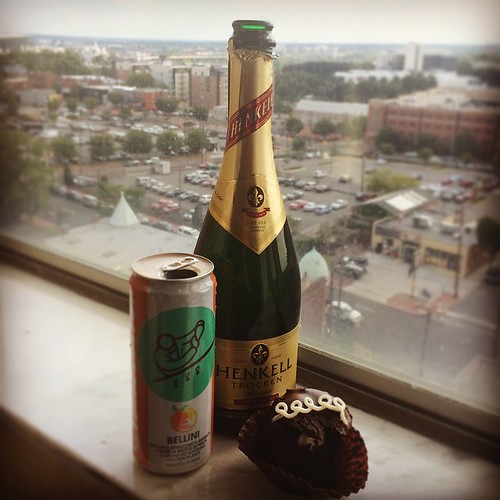 – We walked to venue again, checked out the line, got a cool poster, and moved on to Marriott bar.

– I hid the poster in a Marriott lobby bathroom so it wasn’t wrecked during the show.

– Back to club. We didn’t even check the floor and went right to balcony. Found seats in 3rd row, next to the VIP area. My Twitter pal Brian (who tipped me off to the whole show) was in the same row, opposite end.

– Avers opened. They had four (5?) guitarists, and their female musician was great – I was a bit jealous. [note to self: look into Avers!]

– The crowdsourcing guys made an appearance! And the crowd went wild. (Thanks, Dudes!) 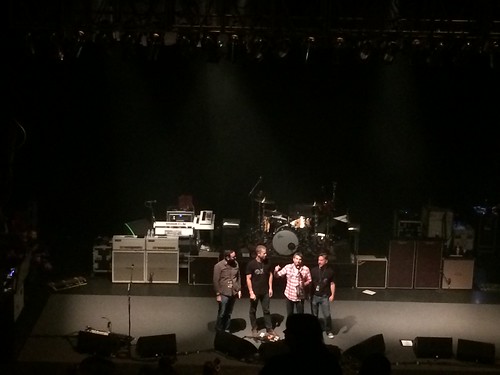 – I chatted with the guy in front of us who was sporting a VW dealer / Foo winners shirt. He won his tickets by answering trivia: What Guinness Record does Dave Grohl hold?

– The show shirts are decent quality, only $20, and come w/ free download code for new CD. I high fived Brian on my way back to my seat after buying Ts and a hoodie

– And finally: show time! It seemed like the crowd cheered a very long time at the open, which was All My Life. 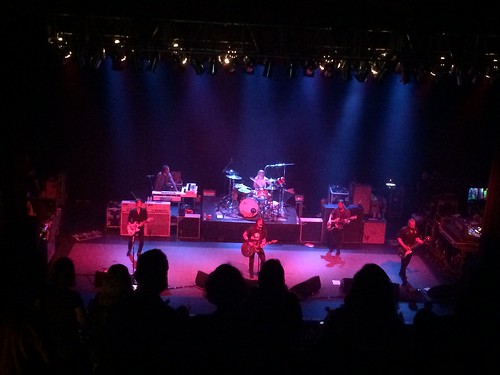 – Dave said, “we’ve played a lot of shows over a lot of years, but never one like this…”

– Later, he thanked the crowd for paying for a show before it was actually booked “Because seriously, thank you!” and he mentioned that it’s expensive for him to pay “the pool boy back at the mansion.”

– Dave gave a brief, sweet explanation that the Virginia mentioned in Arlandria isn’t a reference to his home, but rather, his mom, who he pointed to and introduced.

– One of These Days always makes me think of my sister Kara, who I miss so much, every day.

– Overdue bathroom break during Weenie Beenie (I KNOW!) When I heard Monkey Wrench starting I sprinted back, and our whole section was sitting down. WTF!?

– And I realized I was standing at start of the ONE LAST THING BEFORE I QUIT breakdown part, and thought “screw the people behind me!” Because who comes to a show like this and sits down!? I shouted to the (self-proclaimed hard core, yet seated) guy in front of us “Don’t let these f’ers make you sit down!” and he promptly left before the encore. I worried he misheard me and I somehow offended him, but his wife was totally uninterested, so I gave myself a pass.

– And told a story about tiny Richmond venues and seeing Gwar.

– Pat Smear was smiling for just about the entire show. 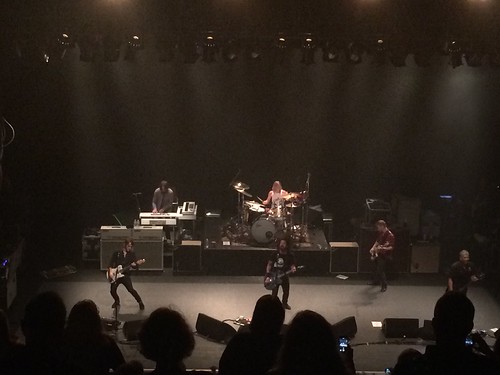 – Taylor followed Dave on stage for what was to be a solo Times Like These. Dave had him stay, so Taylor laid down on his stool with his feet up on the snares and (I hope) took it all in. Dave explained their friendship and explained that after 20 years, if three vans come to an airport to pick them all up, they still just cram into one. And my heart melted a bit.

– The Skin and Bones accordion sections seemed longer than usual to me. I love Rami. Also during S&B, Dave nodded towards his mom while he sang the line “Tell my mom I’m doin’ fine” then shrugged and giggled.

– At end of Hey, Johnny Park, Dave was alone on guitar and asked for house lights off. I was surprised that we were all suddenly in the very dark while Dave jammed a few minutes in an awesome Pearl Jam / Dave Matthews-esque style. I kelt clutching my chest, trying to feel / memorize everything.

-Two and a half hours FLEW by. I felt like there should be a second encore and then realized I was being greedy.

– Just like that, it was over. And I was floating.

– We retrieved the poster from Marriott bathroom. Perfect! 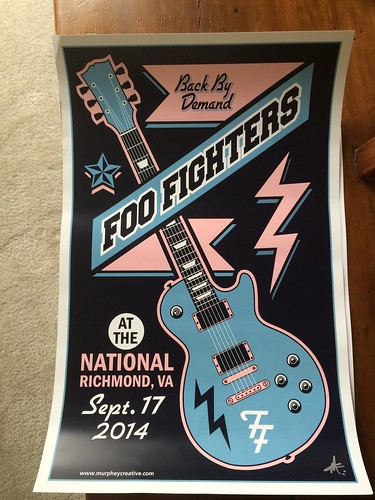 – And the next morning, we went to Sugar Shack, as I felt like I should somehow say thank you. And when we did? They gave us super cool posters! And stickers! 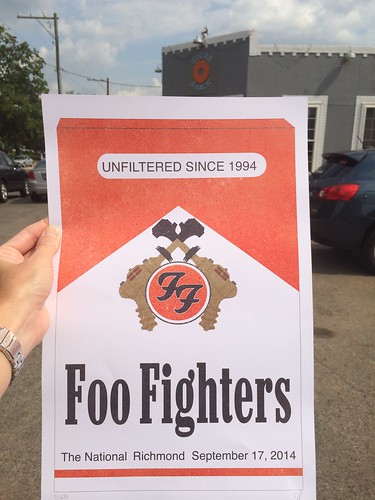 – Less than 24 short hours later, I dropped Carey off at the train station and drove back to Alexandria. And it all felt like a (super fantastic, hard rocking!) dream.

A few other photos are over on my Flickr page.