Holy Guacamole, I’ve been neglecting our little blog! Fear not: The Nicoli have had plenty of adventures – I hope to post about the big ones and be caught up before the end of the year.

Marathon training is a pain in the neck. And legs. And calendar. It’s expensive. I’m a complainer. I promised Big D after last year’s race that I would not go the distance again.

And then: I watched this year’s Boston Marathon. I cried like a baby when Meb won, walked from the TV to my computer to join Team Fisher House, and laced up my shoes…

I trained the same as usual: inconsistently. And thanks to encouragement from a friend, I set a lofty fundraising goal: $2,620 – one hundred dollars per mile. No pressure!

October eventually arrived, and during the team dinner the evening before the race, I got an e-mail notification that I reached my fundraising goal! Chances are if you’re taking the time to read this, you are one of my many supporters – so, once again: THANK YOU!

I stuck to my usual race routine, like laying out my outfit and writing the names of my donors on my pace chart. 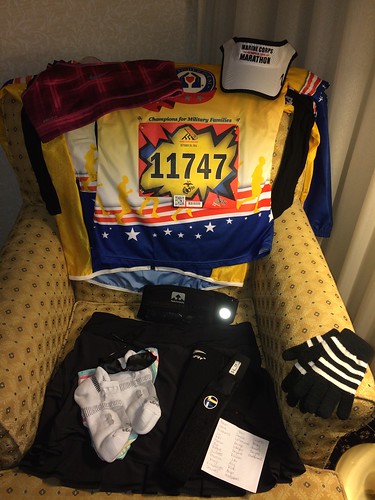 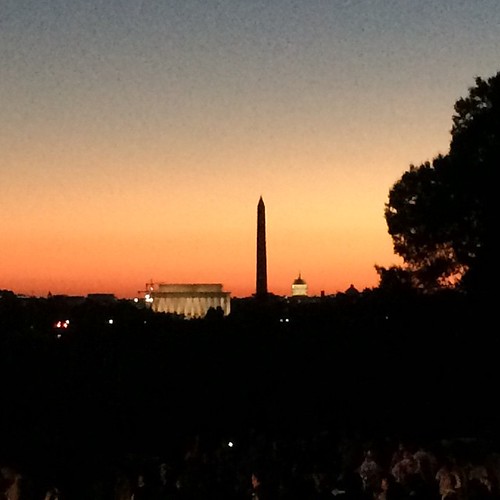 The early morning view from Charity Village was beautiful.

I had some problems on the course: though well-rested and properly hydrated, I had a headache. I washed a giant Motrin down with too much water and the sloshing made me sick in the stomach, so ate something, which made me more thirsty…you can see where this is going. I started walking at mile 18. My legs were wobbly, I felt weak overall, and just when I was doubting myself: the best cheering squad ever gave me a snack, the gulp of Diet Coke I was craving, and our pal Jym set out to run miles 19 to 23 with me, even though he was hurting since he conquered a Tough Mudder himself just the day before. Good grief, I really owe him!! 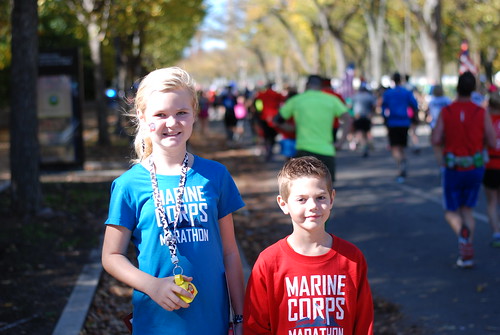 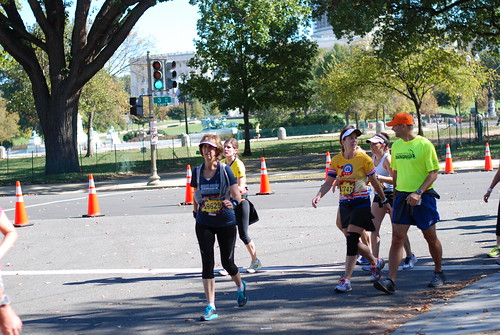 Pretty sure I’m explaining that I just want to finish, and there’s no need to run – walking is just fine. 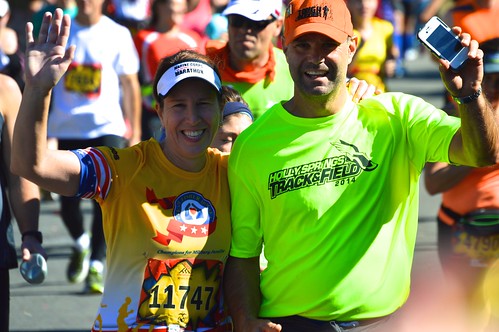 My hands were so swollen – check out those sausage fingers! 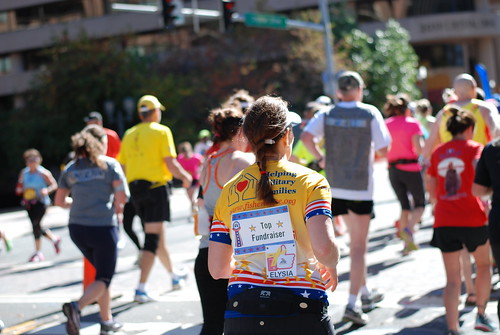 I was able to run a bit here and there. (Folks in a FaceBook training group I belong to used that Thumbs Up you can see on my back to identify each other. Those “friends” were a such a source of encouragement and help to me throughout the year, even though we’d never met.) 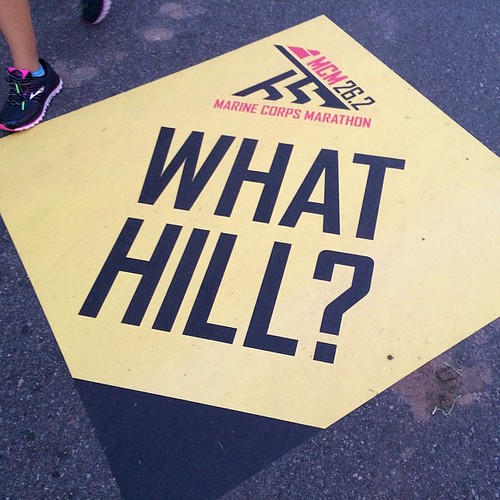 And after 26 miles, just .2 remained: up hill. That distance and the incline doesn’t seem like much if you’re just out for a stroll, but man, oh man… Thankfully, Team Fisher House has coaches on the course and one (that I do not know) was helping me along when Team Coach Stacy spotted me and took over. She’s fantastic, tireless, and was so calm as she ran and talked me through it. I was out of juice and air – I can still hear her saying, “Breathe. just breathe. you’ve got it…” My lungs were heaving. I was ecstatic. And crying.

I thought of all of the people – some are friends of friends that I don’t personally know! – who donated to my fundraising efforts. I thought of the military families that would benefit from the Team – we raised more than $500,000! I thought of my sweet husband who put up with so much throughout the year (what’s new!?) and of my friends who drove for hours so they could crisscross the city a bunch of times to cheer me on. I am one lucky gal.

And: I was proud. I didn’t participate in sports when I was a kid. I’m not particularly athletic, I’m really uncoordinated, and I didn’t train properly (which isn’t anything new.) Yet somehow, I made it to the finish line, through the chute, and to a Marine, who hung a medal around my neck and saluted me. 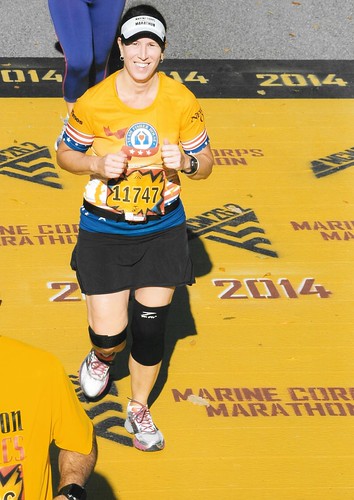 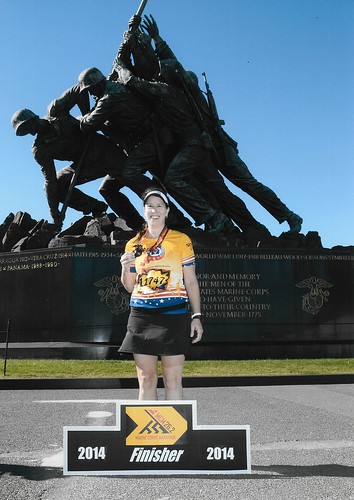 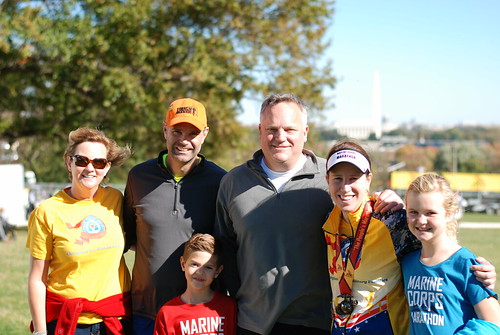 I couldn’t have done it without them! 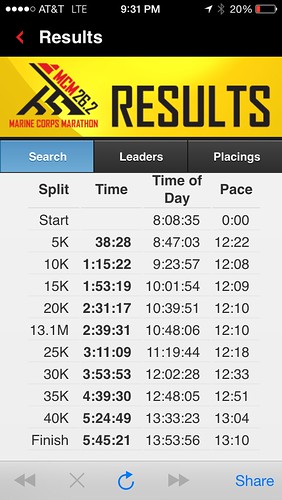 It took a few days until I was really ready to celebrate, and we had a little retirement party: 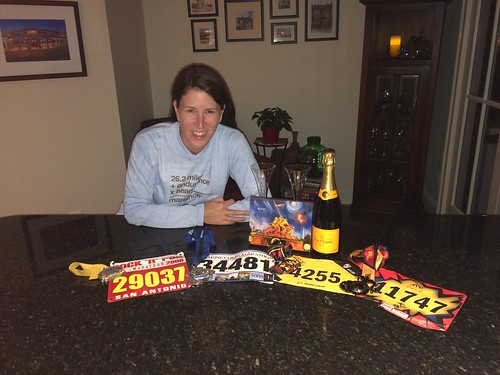 I’ll keep running (I’ve already registered for another half.) But no more marathons for me. I will be back at the Marine Corps Marathon in 2015: as a volunteer.