Considering Big D and I have resided at 16 addresses in 19 years, its no wonder Wiesbaden feels like “home.” We’ve lived there longer than anywhere else. Our three years in Germany were one long vacation with a whole lot of real life mixed in. And our actual vacation there recently was great – I shouldn’t have worried it wouldn’t live up to my memories and expectations.

Our visit was cram-packed with delicious food and wine, beautiful sights, and most importantly: fantastic friends.

We made a beeline for our favorite bar, the Bäckerbrunnen, and spent lots of quality time there throughout the week with the owner, our good friend Chris. 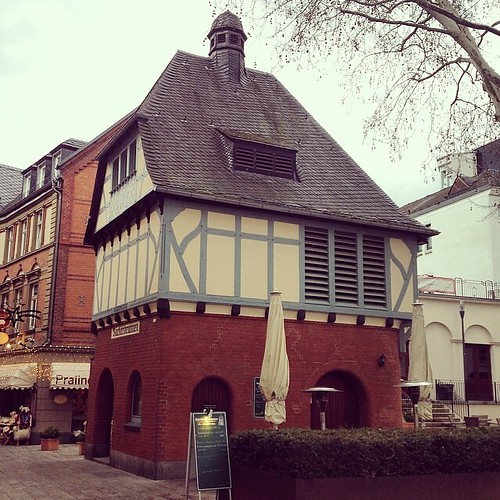 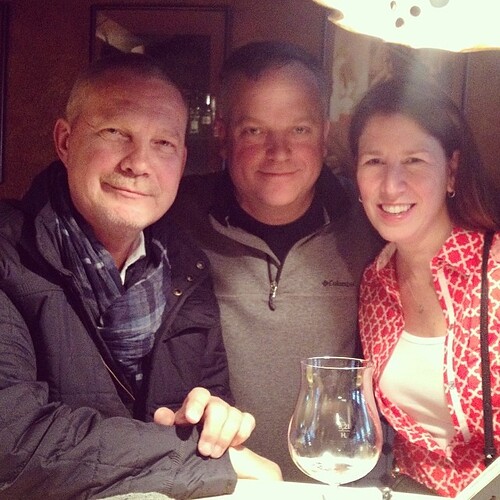 Despite the calendar, it snowed here in Virginia while we were away. Thankfully: the German Spring was in full swing: 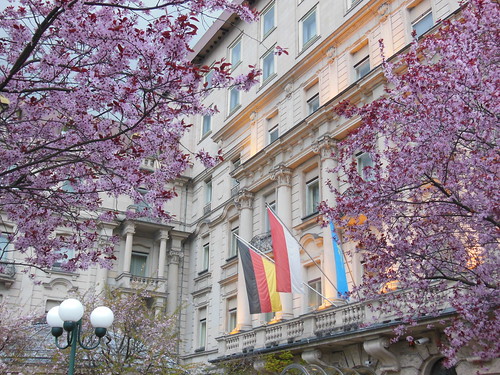 My dear friend Barbara adjusted her schedule, juggled her family responsibilities, hauled me all over the place, and opened her home to us throughout the week. She and equally dear Kirsten hosted a Wine Tasting Luncheon for me which was just lovely! 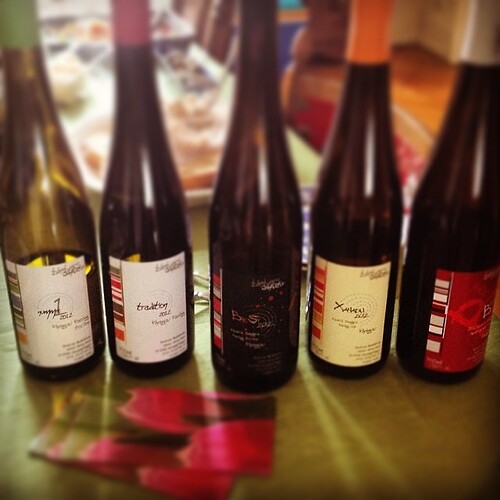 We enjoyed selections from Winegut Bieber (no relation) – and yes, the wines named Beast and Xanadu are inspired by Iron Maiden and Rush!

There’s nothing quite like having a friend you can spend time with from breakfast, luncheon, sunset, dinner, through to couch time with the family, and then ask for a pair of socks before getting a ride home! 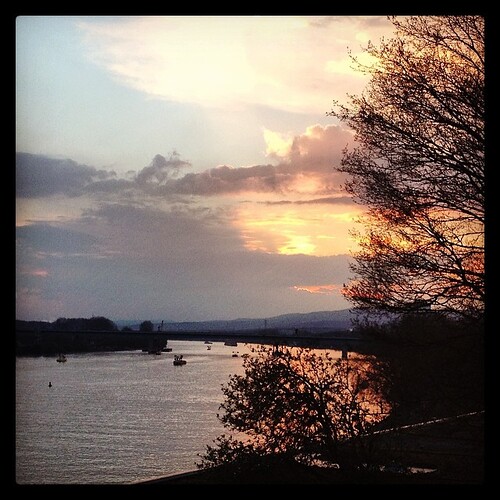 The Rhein view from Barbara’s balcony is as beautiful as she is.

We did some wacky things like blending in with a football crowd in the city of Mainz, and for the first time in ages: we were out past 2am dancing at a club! 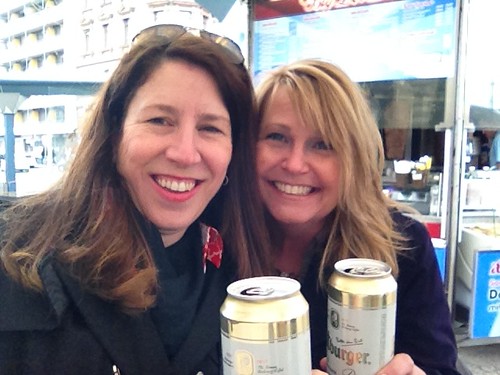 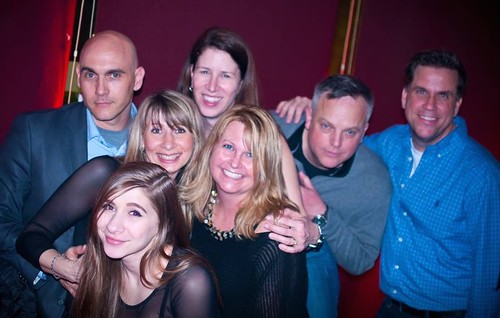 The Rays, Slys, and Nicoli during a very late night at Park Café

It felt great to wander through the market, parks, and wine stands I know so well. 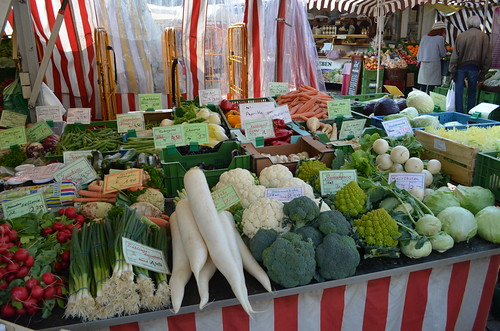 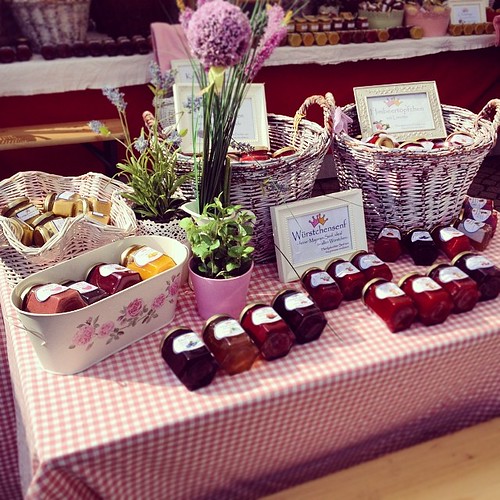 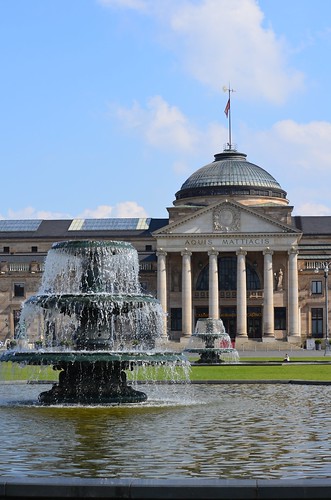 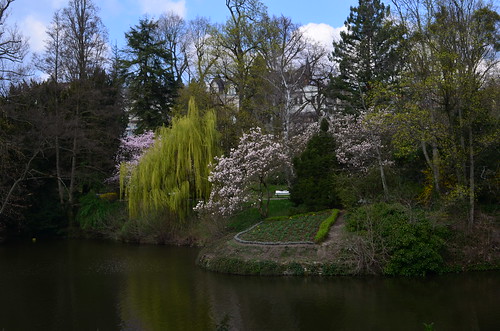 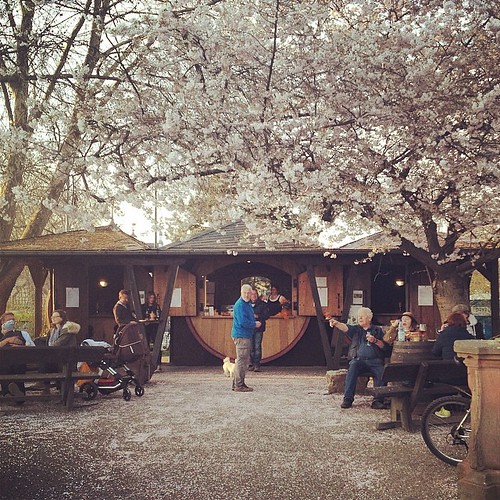 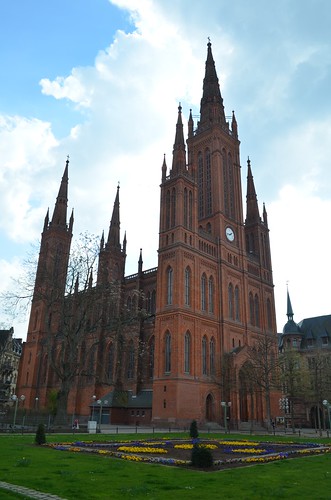 Wiesbadener Marktkirche – for perspective, look for the person in a red jacket at lower left.

The adventures of the upcoming week on the European road were the only thing that made departing Wiesbaden bearable. Stay tuned! 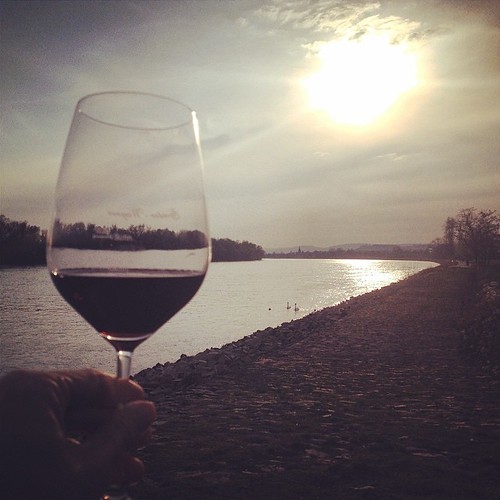 Big D and I planned to visit the beaches of Normandy on D Day for months. I spent hours on the couch planning out our route, booking hotel rooms and trying to hire a tour guide. Thankfully, the guide sent us a message explaining what a terrible idea it was to visit WWII sites on the busiest day of the year…  “Most of a tour on June 6th will be spent sitting in the car park that the roads around Normandy will have turned into, staring at the back of the car stuck in front of you. You will most certainly not be spending much time looking at any sites.”

We moved on to Plan B! I spent even more hours online, cancelled the France reservations, mapped out new routes and made even more hotel reservations near Lake Como, the Cinque Terre and Lake Constance. The trip would include a lot of driving. And here is where I should note that we do not drive well together. My dad was 70 years old when he taught me to drive. And his are the techniques I still utilize to navigate the highways and byways of the world: Little Old Man skills. I prefer a large space cushion between our vehicle and everything around us. Big D likes to be close enough to the car in front of us to change their radio station himself. So after careful consideration, he told me he did not way to take the trip, either.

Thanks to the assistance of a travel agent (why didn’t I start visiting a professional ages ago!?) and  the assurance of TripAdvisor, we were on to Plan C and off to the Grecotel Kos Imperial. Could all of those reviews be accurate? Or was it all too good to be true?

An early morning flight from Frankfurt, a bus ride on which I was nervous since nobody spoke English, and a few hours later, we arrived at our island paradise. As we stood in the lobby, I felt the weight of the world slip away.

This was our first view of what was to come:

Could it all really be as good as they made it look on their website? Yes. Yes, it could:

So for six glorious days and five rest filled nights, we did what is completely unusual for us: Nothing. Well, almost. We ate a lot (I had feta cheese and capers with every meal!) and we drank even more.

We got to know the staff: Efi at the pool restaurant. Natalia at the pool bar. Dimitri at the lobby bar. And since we are the only Americans they’ve so far this year (!) they all treated us like rock stars.

One day, we chartered a sailboat (skippered by a 20 year old kid named Billy) who took us to nearby Pserimos where we barbecued and later swam to shore to drink local beers.

We followed Dimitri’s advice and visited the town of Zia for a fantastic dinner of eggplant and lamb, local wine, and lots of tasty desserts.

We stalked a fellow guest who resembled our good friend Eric and tried to snap secret pictures of him.

But mostly we did this:

We know how lucky we are and we appreciated every minute of it.

These and lots more photos are over on my Flickr page.